Expansion of  into a Three-runway System

1.          I refer to your letter dated 14 January 2016 (your reference: (7) in LD DLO/IS FSRO/3RS/02).  I appreciate the explanations given in the Annex to the letter and the copies of consultant reports attached.  Those reports have enabled me to understand much better the technical issues involved, which has strengthened my position in objecting to the reclamation.

Original Objection
3.          The key point of my original objection dated 6 August 2015 isincreased risk of maritime accidents and consequently that of marine pollution.  The increased risk is indeed confirmed by chapter 8 “2030 Benchmark Year Marine Traffic Collision Risk Modelling Results” of Marine Traffic Impact Assessment Report Final Study Report March 2015 (“MTIA Report” or “the Report”).  On page 82, it specifically recognizes that the Three-runway Project would increase the number of maritime collisions by 1 per year.
4.          In section 8.7 “Risk Acceptability”, the consultant’s conclusion that the increased risk was acceptable was based on a “clear and unambiguous guideline on risk acceptability” (p.83) spelt out in chapter 12 “Hazard Assessment” of the EIA Ordinance Technical Memorandum (EIAO TM) and the associated Annex 4“Criteria for Evaluating Air Quality Impact and Hazard to Life” (full text given in Appendix 1).  On detailed examination of the Report, it is revealed that the consultant has made a serious, fundamental mistake in the application of the guideline.

5.          The original figure in EIAO TM (fig.1) and the figure presented by the consultant on p.84 (fig. 2) are shown side by side below.  According to EIAO TM, the scale on the left-hand side is the frequency (F) of accidents with N or more fatalities per year.  It refers to the number of accidents (“collisions” in the present case).  It has nothing to do with any number related to the population.  But in the Report, the label was simplified to “frequency per year” in the Report and the value of “frequency” was derived by an un-orthodox algorithm.  As will be explained later, the data points plotted in the lower left-hand corner of fig.2 were incorrectly placed and sere indeed wrong by a wide margin of several orders of magnitude.

9.          In the Report, on p. 84, the consultant wrongly adopted “37.1 collisions” in assessing the acceptability of risk arising from the Project.  But an even worse and fundamental mistake was made when the consultant divided the frequency figures by a totally irrelevant figure of 12 million (the number of people transiting the Focus Area aboard vessels).  Their pretext is “to create the risk profile of the fatality potential”, which is an un-defined phrase carrying no established sense.  It is merely a jargon to frighten off non-mathematicians and non-statisticians.  By introducing the irrelevant denominator, the end result is that the derived figures are NOT what the clearly defined term “frequency of accidents” means.  If not for the wrong adoption of “, the derived figures would have been SIX ORDERS OF MAGNITUDE OFF.

10.      Following the correct approach explained in paragraphs 6-8, the correct positions of the data points plotted in the official figure in EIAO TM Annex 4 Societal Risk Guidelines for Acceptable Levels are shown in fig. 3 (next page).

11.      It is abundantly clear from fig. 3 that the additional risk arising from the Three-runway System falls within the “UNACCEPTABLE” zone.  This confirms the concern which I expressed in my original submission dated 6 August 2015.  Since my concern has been validated by the consultant’s own data and the criterion it has adopted viz. EIAO TM Societal Risk Guidelines, I am therefore in no position to withdraw my original objection to the reclamation associated with the Three-runway System.

12.      My “Further Comment No.  dated 22 November 2015 is also validated because only with the information available in the MTIA Report is it possible to discover that the consultant has made a gross mistake in the assessment of the acceptability of additional risk to maritime safety arising from the Three-runway System.

Further Comment No. 2
13.      With regard to Further Comment No. 2, it is observed that p. 48 of MTIA Report made no reference to any Chinese source on the projected growth in ocean-going traffic from Chinese Mainland ports upstream in the  estuary, in particular the Shekou Container Terminals (SCT).  In Table 3.3 “Summary of Stochastic Forecast Increases (2013 to 2030)”, under “Ocean Going”, the “Upper Bound” and “Lower Bound” were set at 66% and 61% respectively.  But as stated in my original submission, the traffic volume of SCT increased by 51% between 2009 and 2014 alone.  The consultant’s figures were therefore most likely a significant underestimate.

14.      Furthermore, because goods carried by these ocean-going vessels in transit through Hong Kong waters are not captured by   statistics, no  data source can remedy this shortcoming.  The failure of the consultant to obtain reliable data from the Mainland side rendered its projection for Ocean Going vessels invalid, and consequently, its simulations and risk assessments invalid.  Therefore my Further Comment No. 2 stands even more strongly with additional information from the MTIA Report.

Further Comment No. 3
15.      With regard to Further Comment No. 3 which concerns the mutual interference between maritime safety and aviation safety, MTIA Reports affords me an opportunity to examine closely the setting up of the HKIA Approach Areas (HKIAAA), which as you have mentioned in your letter dated 14 January 2016, “is an area established in the vicinity of the airport island to safeguard flight safety”.  Fig.4 shows fig. 2.3 from MTIA Report, with the addition of four measurements of the distance between runway thresholds and the corresponding HKIAAA boundary segments.

16.      The “safeguard” distances for the northern runway are 2.1 kmon both the eastern and western sides.  They are correspondingly only 62% and 58% of their counterparts on the middle runway.  The eastern extent of the HKIAAA for the northern runway has been curtailed in order to avoid breaching marine safety in .   On the western side, it was clearly limited by the Hong Kong– Mainland border.

17.      Maritime safety has been nominally ensured by the HKIAAA delineation shown in fig. 2.3 of MTIA Report, allowing high airdraft vessels to travel on .  However, it has been achieved by sacrificing the “safeguard” distances for the northern runway.  It means that the altitude of aircraft on crossing the boundary of HKIAAA when using the northern runway will be about 40% lower than when using the middle runway, on the basis of the shortened safeguard distances.  This obviously lowers aviation safety level of aircraft landing and taking off from the northern runway arising from interactions with marine transport underneath the flight path near HKIAAA boundary.

18.      This critical safety issue has not been addressed by any report published by the Airport Authority so far.  In the absence of any conscious effort by the due authority to quantify the additional risk due to the shortened safeguard distances, it is premature to conclude that the increased risk of aviation accidents is within acceptable levels.  Therefore my Further Comment No. 3 stands even more strongly with information available in the MTIA Report.

Additional Observations
19.      The north-western corner of HKIAAA is artificially cut(see fig. 4 above) owing to the limitation of the  – Mainland border.  It has negative impact on aviation safety.  The consultant recognized this issue in section 5.4 on p. 66 of MTIA Report.  The Report indeed recognized that derrick lighters with airdraft exceeding 30 metres would cross the area about once a day.  But the consultant was unable to offer any means to ensure that no vessel with such airdraft would cut corners and infringe aviation safety at this sensitive area (section , p. 95-98).  The consultant has merely left it as “subject to further study and under Environment Permits Conditions” (p. 98).  Thus this remains an unresolved safety issue.  The reclamation cannot go ahead with such critical safety issue hanging in the air.

20.      The MTIA Report explicitly said that it did not cover marine traffic impact “relating to Mainland Anchorages (Lantau Island No. 2  and  No. 23 DY) and Airdraft” (p. 7).  It said that a separate report on this subject would be completed in 2014 and issued to Shenzhen Maritime Safety Administration for consultation.  It is understood thatcertain structures with tall airdraft (related to the petroleum industry) anchored in  No. 2Anchorage would infringe the safety envelope of aircraft landing on the northern runway from the westand that coordination with Shenzhen authorities is required to resolve this aviation safety issue.  So far, the public has no access to any information on this subject or any information on relevant  – Shenzhen consultations.  Therefore this remains an open question with no guarantee of success in the resolution of the maritime-aviation safety issue.  This being the case, there is no guarantee that aircraft can land safely on the northern runway from the west, which means that the purpose for which it is built cannot be realized.  In view of this, the reclamation cannot go ahead.

Conclusion
21.      My objection to the proposed reclamation under the Foreshore and Sea-bed (Reclamations) Ordinance (Chapter 127) continues to stand, together with the three Further Comments.

22.      My objection is firmly based on:
a.       Unacceptable societal risk which has been validated by MTIA Report data
b.       Gross mistake in the consultant’s assessment of acceptability of accidents with fatalities
c.       Failure of MTIA Report to factor in growth in ocean-going traffic based on reliable Chinese sources and significant underestimate compared with information from Shekkou Container Terminals
d.      Aviation safety in relation to the northern runway has been compromised after priority being given to maritime safety, to an extent not yet quantified properly
e.       Aviation safety issue associated with the north-western corner of HKIAAA which has remained unresolved
f.       Open question about maritime-aviation safety issue associated with Lantau Island Anchorage No. 2, which requires  – Shenzhen consultation and coordination, of which no evidence has been presented to date.

23.      I strongly urge you as a matter of due diligence to engage a neutral expert of high standing in statistics, with no vested interest in the Three-runway System, to examine critically the assessment done by the Consultant of the acceptability of additional risks arising from the Three-runway System, in particular the contents of section 8.7 of MTIA Report.  Before this is done, presenting the proposed reclamation to Executive Council would not be good governance and is subject to judicial review.

24.      I sincerely hope that you would treat SAFETY as top priority in dealing with this matter.  Economic consideration must not interfere with your decision. 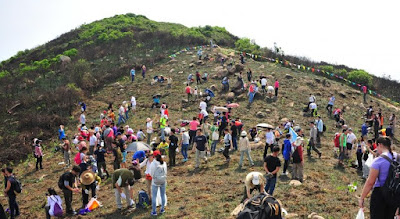