The ecological and heritage value of Long Valley is reiterated.

The document Stage Two Public Engagement Digest dated November 2009 made prominent reference to "land owners' property right" (p.4). This submission questions this position and the associated "guiding principle" about considering "development" (which means "buildings" in the Hong Kong context) with "private sector participation" as a means to "conserve an area of Long Valley".

This submission recommends that the area referred to above should be formally zoned as "Conservation Area" or "Nature Reserve" in recognition of its recognized ecological and heritage value. It further recommends that Government should resume the land in that area for the public purpose of building the Kwu Tung North New Town as a sustainable community with its roots connected to Nature and Heritage.

1. This submission is made in my personal capacity as a member of the Hong Kong citizenry and as someone who knows the area well through repeated visits over a period of some thirty years. I also write as a person who cares about the long-term future of Hong Kong.

2. While the submission makes specific reference to the NENT New Development Areas in the limited context of this consultation exercise, it hopes to communicate to the Government an observation about a subtle but extremely important evolution in the way the Hong Kong public view "development". The concern is that, if Government does not re-align itself to the changing values, serious conflicts would be waiting to happen.

3. The ecological value has long been established beyond doubt. For example, it is part of an Important Bird Area recognized by the BirdLife International, the international authority on birds and their habitats.

4. The ecological value has been affirmed by the Director of Environmental Protection when he rejected the Environmental Impact Assessment report of the KCRC in connection with the Lok Ma Chau Spur Line in 2000. It was further re-affirmed by a tribunal set up to consider KCRC's appeal against DEP's decision. KCRC respected the ruling and built the Spur Line underground where it crosses Long Valley.

5. In 2004, Long Valley is recognized as one of the 12 sites of outstanding ecological value under the Government's nature conservation policy. The government's Environmental & Conservation Fund has given NGO's funding to manage areas in Long Valley to enhance its biodiversity and to conserve its agriculture heritage, and to make these values accessible to the general public.

6. The careful management of the area has made it attractive to threatened species of importance to the whole world. For example, five Black-faced Spoonbills visited the area in December 2009, alongside Yellow Breasted Bunting in the rice fields.

7. From aerial photographs, it is apparent that Long Valley is the biggest remaining piece of contiguous agricultural land in Hong Kong. It is the last reminder for Hong Kong people of how agricultural land looks like before it succumbs to relentless building development.

8. On the ground, visitors to the area since it became well-known after the 2000 public campaign to protect the area against the railway have all marvelled at the serenity of the agricultural scene and the natural liveliness of the area, in contrast to the mechanical hustle and bustle of the noisy and crowded city. It is practically an open-air museum with education value for students and grown-ups alike. The area is thus a resource of immense public value, which would enable people to re-connect with the natural and agricultural heritage of Hong Kong.

9. Land owners do have rights. However, that right is not open-ended. It is subject to the context in which the right is to be exercised. Where it is agricultural land, then the right of the owner is confined only to the practice of agriculture on the piece of land he owns. It is incorrect to expect or claim other "rights" beyond this.

10. Constructing any building structure on agriculture is by law an offence. It is absolutely clear that there is no such thing as the "right to build" for an owner of agricultural land. To claim "property right" as if it implies the right to build houses on the land is to ignore the letters and the spirit of the law. Thus the Government would be breaking the law if it goes ahead to give "consideration of landowners' property right" (p.4 of Stage Two Public Engagement Digest) as if it is a right to build houses if it refers to agricultural land.

11. I understand that the major part of, if not all of, the area shown as CDNCEA in the Kwu Tung North New Development Area PODP Major Development Concept (p. 6-7) is agricultural land.

12. Thus it is fundamentally wrong to adopt the "guiding principle" of considering "development" (which means "buildings" in the Hong Kong context) with "private sector participation" as a means to "conserve an area of Long Valley" (p. 4).

13. CDNCEA is an undefined term in planning and zoning. It is not appropriate to adopt a new and undefined term in connection with a very sensitive area like Long Valley. Using the term will surely lead to endless debates, conflicts and court cases. It does no good to the harmony to the Hong Kong community.

14. By usage, "development" has come to mean "buildings" in Hong Kong. Applying the term CDNCEA to Long Valley and the nearby area to the north will empower landowners to build in the area, an activity prohibited according to the current zoning as agricultural land. It would destroy the ecological and heritage value of the site, but it is of critical importance to recognized that that value belongs to the whole Hong Kong community, not just the landowners. As pointed out earlier, adopting the label and thus allowing buildings to invade a piece of agricultural land is illegal.

15. Introducing the term CDNCEA would create unrealistic and unjustifiable expectations among landowners that they could reap significant monetary returns by later selling the land. This would intensify the conflict between landowners and the Hong Kong community as a whole, the latter wishing to be a party to enjoy the value of this tract of agricultural land conserved as it is. It would be very unwise of the government to sow such seeds of conflict and instability in the Hong Kong society.

16. Noting these factors, I strongly advise dropping the CDNCEA label from the document. Substituting "Conservation Area" or "Nature Reserve" would suit the situation more.

17. In recent years, there is a subtle but extremely significant evolution in the way the Hong Kong people view "development". It is reflected in what has happened in connection with the dismantling of the old Star Ferry and the Queen's Pier, the destruction of the old communities in Wanchai, and currently the high speed rail project. The Hong Kong community is now placing much higher values on humanity, on how the community could sustain habits, culture and heritage, on how Hong Kong people could live beyond blindly chasing after money and material growth, etc. That is, it is a revolt against seeing "development" purely as a subject in money and economy, as more shiny buildings or majestic physical structures, as more shopping malls, etc. Rather, "development" has to mean adding positive value to people's everyday life, in terms of aesthetics, liveliness, connectedness with nature, culture and heritage, etc.

18. Labelling the eastern side of the Kwu Tung North NDA as CDNCEA and allowing buildings to invade this important site and destroy Hong Kong's link with nature and heritage will be sure to touch on the nerve of the Hong Kong community which has by now acquired a new set of values.

19. Not recognizing this new spirit of Hong Kong could mean the whole NENT programme failing to get the support of the community and getting into endless troubles.

20. I propose the following:

(a) making it clear that the concept of "landowners' property right" where agricultural land is involved (including specifically the Long Valley context) does not mean the "right to build" (p. 4);

(b) drop the concept of "development that can integrate with the natural ecological environment through private sector participation" (p. 4);

(d) Government resume the land in Long Valley and neighbouring areas (labelled together as CDNCEA on p. 6-7) for the public purpose of building the Kwu Tung North New Town as a sustainable community with its roots connected to Nature and Heritage, and manage it for conservation and heritage objectives.
張貼者： 草雲居主人 於 星期二, 1月 12, 2010 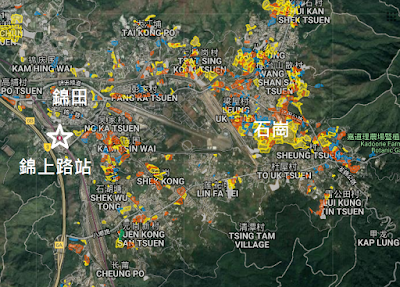